Showing posts from June, 2015
Show all

Just another day? Not in a heart-beat! 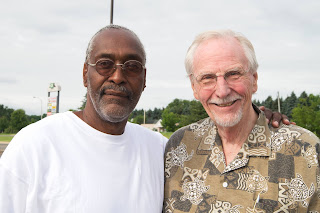 It was a religious experience!  That’s the only way I can describe it.  And there were only five people in attendance.  Let me explain. As a full-time advocate for prisoners, I savor the opportunity to witness that rare occasion when an inmate steps into the free world.  My friend Joe Evans was due to be released from prison after 39 years behind bars. He has been serving a life sentence for a dastardly crime committed in his youth while high on drugs and alcohol.  Now, he’s a changed man. Sensing that this might be a very special occasion, I invited videographer Dirk Wierenga to join with me.  Dirk is producing a professional documentary about the work and the mission of HUMANITY FOR PRISONERS.  We were not disappointed. The location for this little program was 3100 Cooper Street, Jackson, Michigan…right at the front door of the Cooper Street Correctional Facility.  Joe is 61 now…his elderly mom and his cousin, who served as their driver, were on hand from the
Post a Comment
Read more

Til death do us part

June 26, 2015
I played the organ for the memorial service of a good friend today.  While funeral services can be very sad and heartbreaking, that was not the case in this particular situation. Jan, her husband, her kids and her grandchildren were all aware that her health was rapidly fading.  Her last days were beautiful because             she had medical experts who kept her apprised as to what was happening             she didn’t have to worry about excessive pain, thanks to hospice             she was blessed to have compassionate professionals taking care of her needs             she was residing in a warm, pleasant, comfortable atmosphere             she was surrounded by family right down to her last living moments. As I heard about this and thought about this during the service this morning, I must confess that my mind began to wander.  Because of my line of work---interacting with Michigan prisoners on a daily basis---my thoughts often drift to the plight of inmates.  M
Post a Comment
Read more

June 20, 2015
Father God, On this special day honoring dads, we remember fathers and grandfathers whose hearts are heavy. We pray for Mr. E, whose lavish life-style came to an abrupt halt when two evil families plotted a way to get their hands on some of his wealth.  Their little girls would tell stories about his fictitious behavior.  Cops, a prosecutor and a jury all believed their story.  Mr. E doesn’t live in his mansion any more, doesn’t drive any of his fancy cars, and doesn’t eat gourmet meals.  His life behind bars is hell.  And he won’t get any visits today.  His wife of 20 years went looking for someone else who could give her the good life.  And his two daughters, now parents themselves, don’t really want their kids to know anything about “naughty” Grandpa. There are hundreds more like Mr E, nay thousands, and we place their broken hearts before you. We pray for Mr. B, an angry and an embarrassed father, who’ll be making the long drive to visit his son in prison today…but he’
1 comment
Read more

The world ain't supposed to be that way!

June 18, 2015
I’ve never forgotten the quote, although I have forgotten the circumstances.  A preacher was quoting these words, emitted by an African American man, at the scene of a tragic inner city incident…using them as a sermon illustration.  I remember those words, daily, as we hear one sad story after another in the HFP office.  Let me share. I was on the phone for a lengthy conversation with the elderly mother of an inmate yesterday.  Her son was in good health when he entered prison, but two years ago an accident happened in the weight room.  Another inmate dropped a 45-pound weight on his foot.  X-rays showed no broken bones.  That was two years ago, but the foot kept swelling.  Later the swelling extended up to the knee.  Three surgeries later, the swelling now extends to the groin.  Doctors claim they don’t know what it is, and can do no more.  The inmate must wear what is called a pressure boot to keep his leg from swelling, and he’s on crutches.  The man is penniless.  The elderly
1 comment
Read more

A tale of two women

June 11, 2015
Two women, relatively unknown.  You’ve never heard their names before.  Their incarceration doesn’t make the news.  Their family members have been relatively silent.  To those of us who live in Michigan, Jane and Sally don’t really have names, they’re just a statistic.  They are among an estimated 10-20,000 state prison inmates who are mentally ill.  I’d like to focus on the predicament the families of these two women are facing, just to give you an idea as to how cruel and inhumane our system is when it comes to handling mentally challenged prisoners. Jane is 25, Sally is 40, and neither should have gone to prison in the first place.  A system with a heart and with adequate facilities would have admitted them to a psychiatric hospital.  But that’s not the nature of our system, so they’re in prison now, in what is called the acute unit.  And as of today, neither family has any idea as to how they are, or how they’re being treated Jane’s mother has not been permitted a pris
Post a Comment
Read more

A letter to the Court of Appeals

June 08, 2015
This is an open letter to the Honorable Michael J. Riordan, the Honorable Pat M. Donofrio, and the Honorable Jane M. Beckering, judges in the Michigan Court of Appeals. Dear Judges Riordan, Donofrio and Beckering, Did you see us all there last Wednesday?  Did you see all the people in the courtroom for your first one-hour case of the day?  I just wanted you to know that we were not there to support the man from the Michigan Attorney General’s Office…the one who argued that Michigan’s Civil Rights Act’s protection and prohibition of sexual harassment and abuse do not apply to prisoners.  Or, for that matter, to anyone detained in a county jail or on parole.  I heard him inform you that these were the “most dangerous” people in the State of Michigan. I was the old, gray-haired man sitting in the front row, “over the hill,” some might claim, but feeling that my hundreds of friends behind bars deserved to be represented in that courtroom.  I don’t take my marching orders from
Post a Comment
Read more

June 04, 2015
There’s a downside to this business of advocating for the least of these.  A hurting heart.  My heart breaks daily as the stories pour in across our desk. Just this week--- Mr. M (wrongfully convicted) wrote:     I found out Saturday afternoon that my Mom, who was supposedly coming here to visit last weekend (for my birthday & Memorial Day weekend), was taken via ambulance to a hospital in NY, and then admitted. early last Friday morning. Preliminary blood work shows her tumor-markers to be high for the presence of some form of cancer, but we won't know for sure until test results are revealed.  Would you PLEASE keep my Mom in your prayers, and ask others at HFP and the Christian community to please do the same? I'd so appreciate it. I never really thought, or believed it probable, that I might not see my Mom again on the outside. I'm so close to this being over, and although I still have a ways to go on-paper, for a 72-year old woman, that can seem like an ete
Post a Comment
Read more

Sorry, no hugs in prison

June 02, 2015
Last year I and few of my musician friends paid a visit to the campus of the Women's Huron Valley facility, where all female prisoners in Michigan are housed.  We were there to present a gospel concert.  As we walked through the yard I spotted one of my many friends in this facility, ran up to her and started to give her a hug  She jumped back, saying, "You're going to get my ass in trouble!"  No hugs allowed.  I was so pleased, as a follow-up to that experience, to receive this brief essay in the mail. The following guest column was written by Ms. S.M., a Michigan prisoner and a dear friend:   I was sentenced to LIFE and 54-81 years in prison.  Did the courts know what they were doing?  I am sentenced now to a lifetime without a hug.   Any physical touching of ANY kid, including a hug, is prohibited by policy.  When I go to church, the volunteers cannot hug me.  If my mother or father were to die, my friend could not hug me.  If I am having a breakdown o
1 comment
Read more
More posts

Doug Tjapkes
Doug Tjapkes is Founder of Humanity for Prisoners, a 501c3 organization located in Spring Lake, Michigan. He formed the organization in 2001 based on a dream of his best friend, Maurice Carter, who had been behind bars for 29 years for a crime he did not commit. He enjoyed only three months of freedom. He died at the age of 60 in October, 2004, before he could qualify for a liver transplant. Born and raised in Muskegon, Michigan, Tjapkes is a retired broadcast journalist whose work has resulted in numerous awards and citations between 1954 and 1983. He was a seller of church organs from 1983 until he assumed his new career at the helm of HFP. His avocation is church music. He has served as organist, pianist and choir director at Ferrysburg Community Church in Spring Lake, Michigan, for more than 50 years. He is the author of a book telling of his ten year relationship with Maurice Carter and their battle for freedom entitled Sweet Freedom. Doug has four grown children and resides in Ferrysburg, Michigan.

Enter you email address below to get updates each time a new blog is posted!